Interactive: Population projections by race and age through 2030

This interactive graphic illustrates population changes from 2000 to 2010, as well as population projections by race and age for five year increments until 2030. As you can see from this graphic, assuming no net in–migration, the New Orleans metro will be “majority minority” by 2030. The working age population will diversify slightly more quickly and 52 percent of working age adults in the New Orleans metro will be people of color by 2030. Fully 60 percent of children under 18 years of age will be non–white by 2030. These projections were developed as a part of the Data Center’s report “Building an Inclusive, High–Skilled Workforce for New Orleans’ Next Economy.”

Building an Inclusive, High–Skilled Workforce for New Orleans’ Next Economy 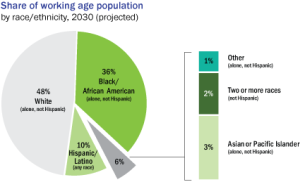