The 2020 Census made headlines—as it typically does—but this time the headlines about the dramatically shrinking White population were largely misconstrued. The real headline is the eye-popping number of people who reported more than one race for the first time.

Dramatic increases in people identifying as more than one race.

In metro New Orleans, the number of non-Hispanic people reporting more than one race jumped from 15,494 in 2010 to 43,898 in 2020. But according to birth records only 5,161 non-Hispanic, multiracial children below 10 years old lived in the metro as of 2020. What could account for the additional 23,000 multiracial people?

The 2020 Census form made it much easier for Americans to claim their diverse heritage. People who previously identified as “White alone” claiming their African American, Native American, or Asian ancestry for the first time in a census survey is the primary driver of the increase. In metro New Orleans, the number of people identifying themselves as multiracial (not Hispanic) more than doubled in every single parish. 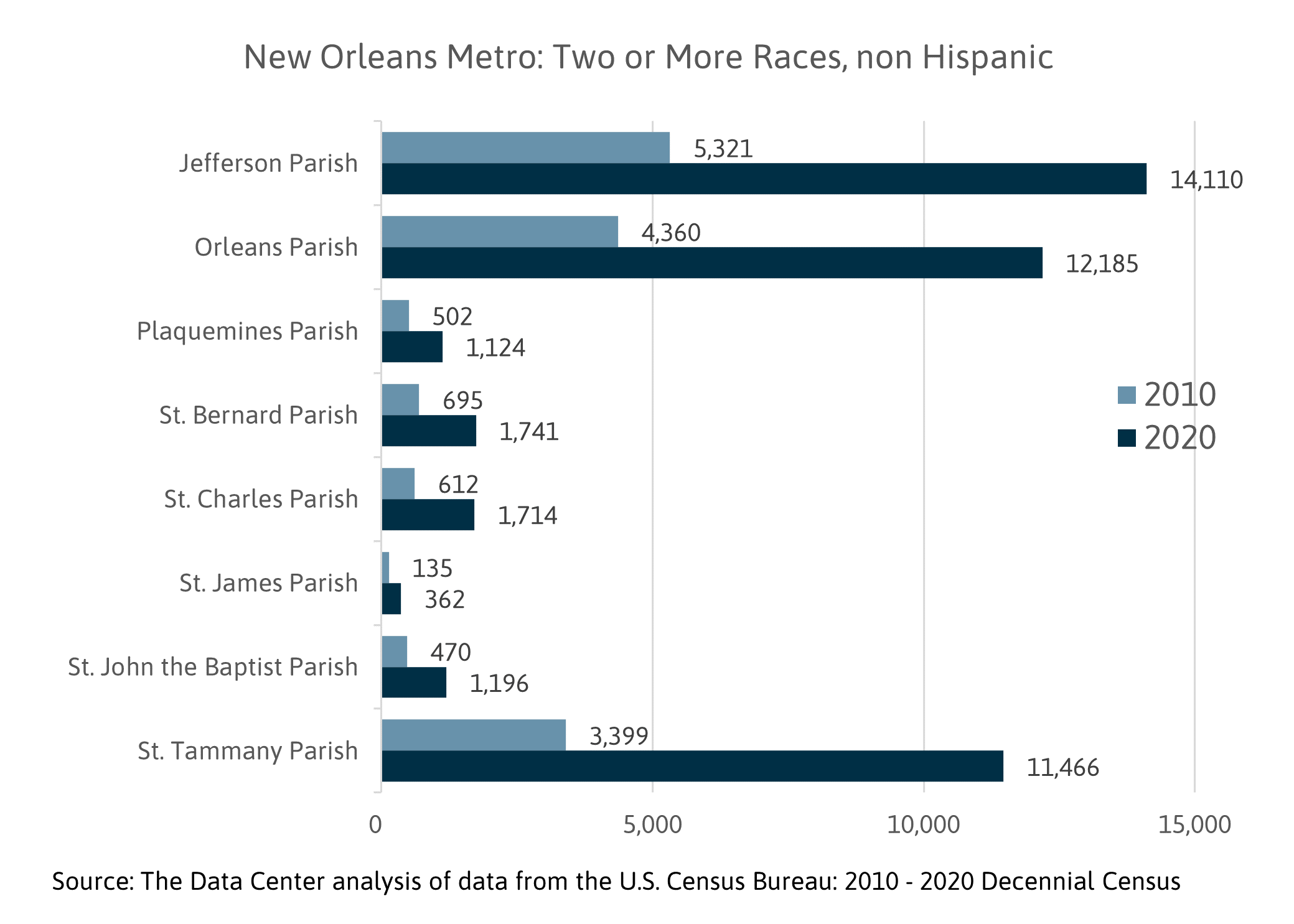 Census race categories change because race is a social concept that is not static. 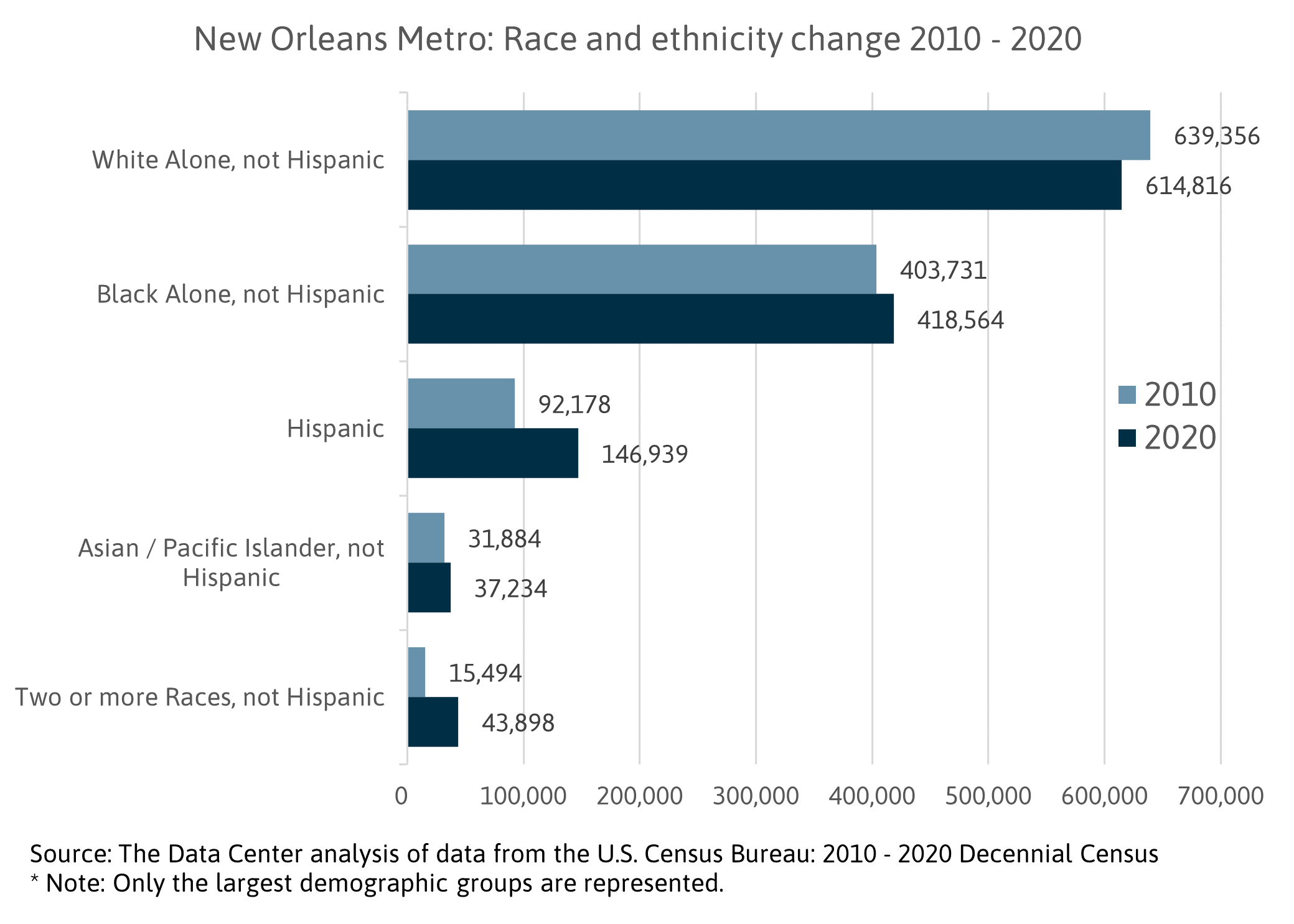 But separating Hispanics from other race groups can be deceptive—because many Hispanics identify as a particular race, such as White or Black. Conversely, some identify with no particular race and find the concept of “race” confusing. The first graph below separates the population of metro New Orleans by race, with Hispanics as a separate group, which is the standard way most demographers present these groups. However, the second graphic adds the Hispanic population to each race group with which they identify, if any. These graphics highlight another way in which race and ethnicity are more complex than typically presented in standard demographic analyses. 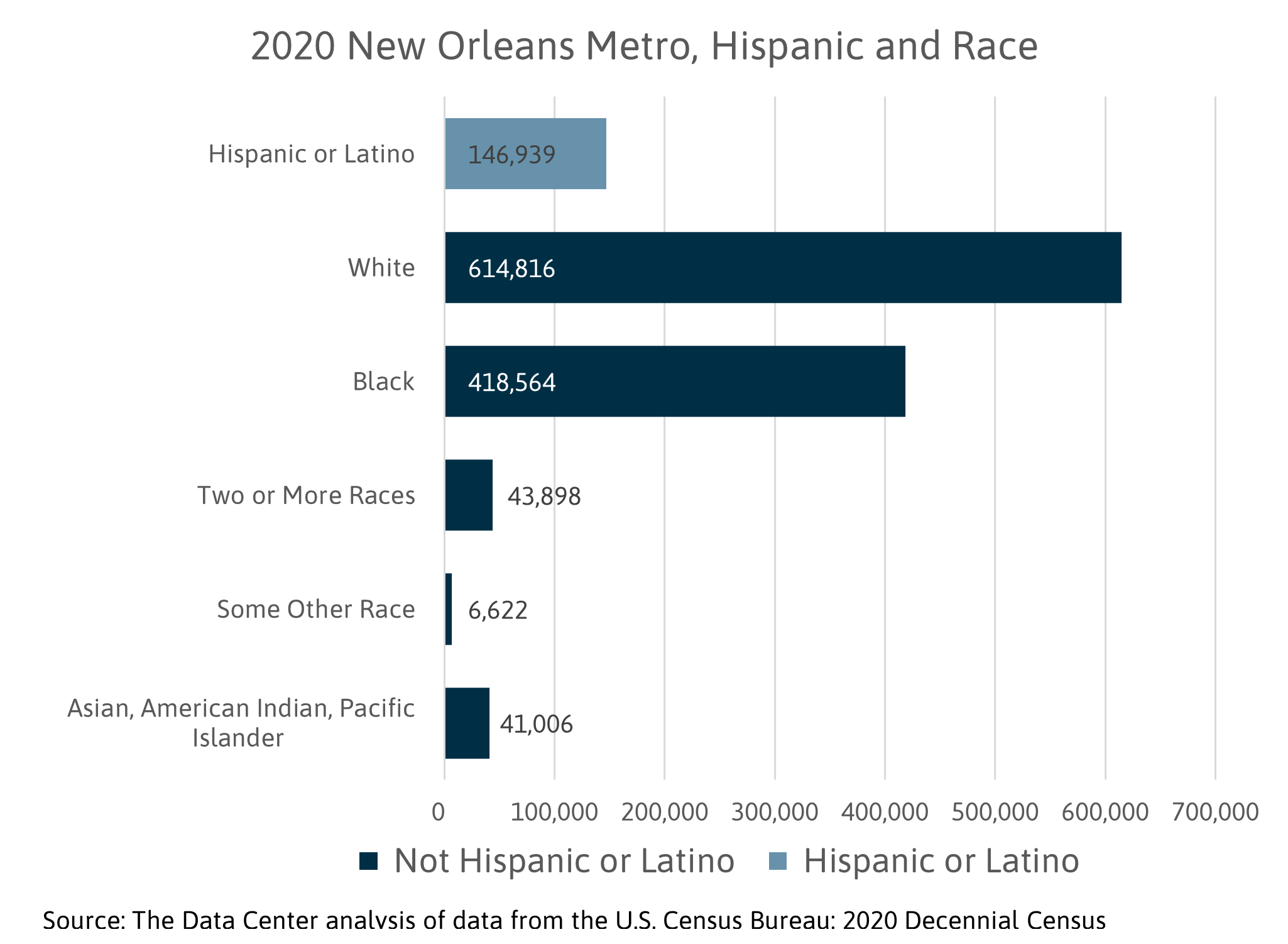 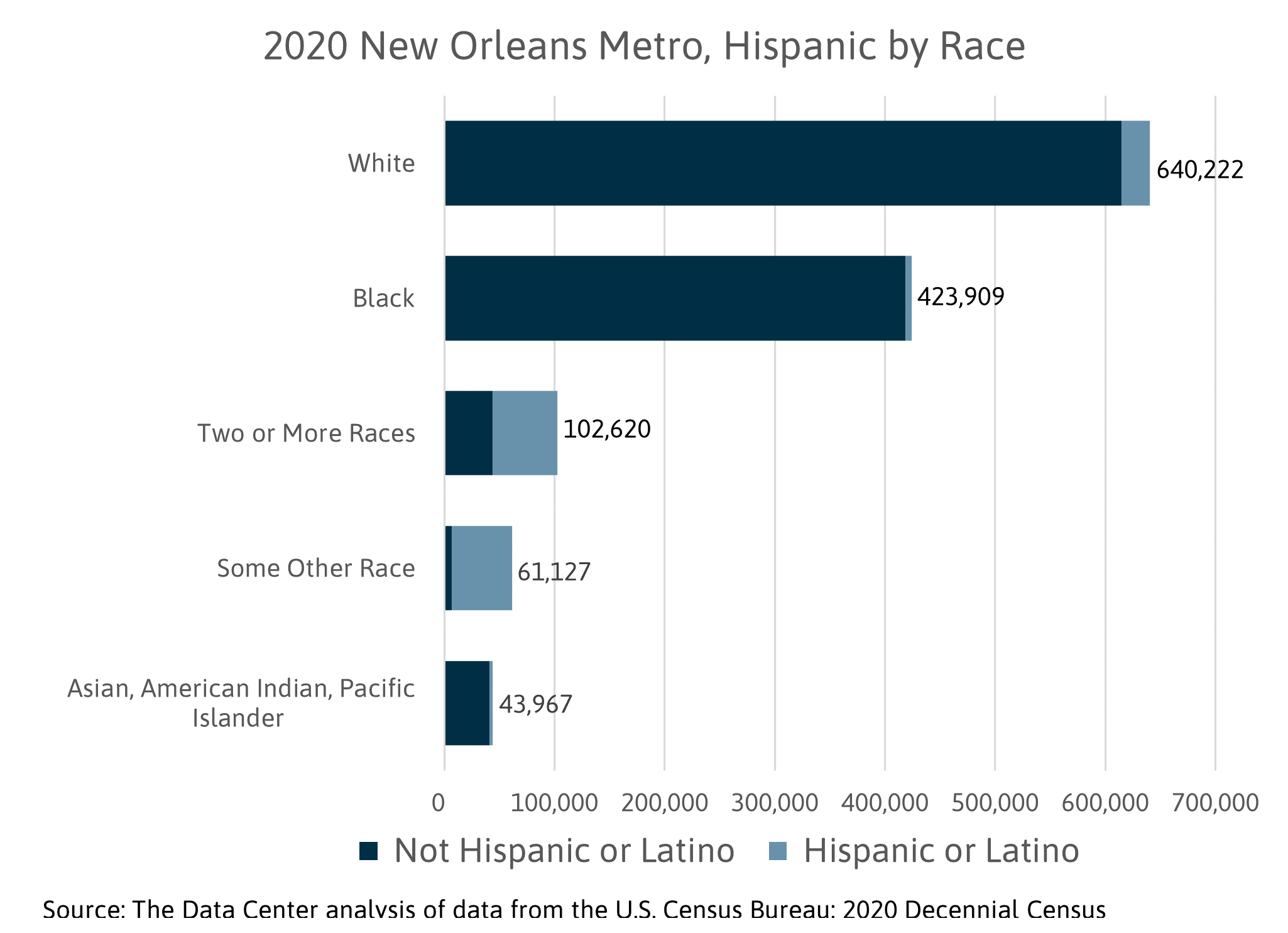 Exurban St. Tammany is booming, consistent with national trends. But growth patterns in other metro parishes are marked by Katrina-related outflows and inflows.

Among the largest parishes in metro New Orleans, Orleans gained 40,168 residents this decade but still has over 100,000 fewer residents than in 2000 and remains at less than 80% of its pre-Katrina population. Jefferson Parish’s population is relatively stagnant, gaining 8,229 residents this past decade but remains just under 15,000 shy of its pre-Katrina total. St. Tammany Parish continues to boom, adding 30,830 residents this last decade after gaining 42,472 between 2000 and 2010. There’s some evidence that the increase in remote work during COVID has escalated trends toward exurban moves nationwide. Surveys find that employees are more likely to prefer remote or at least hybrid work models as employers consider reopening offices. With these dynamics in mind, growth in outlying parishes like St. Tammany could continue to grow well past 2020. 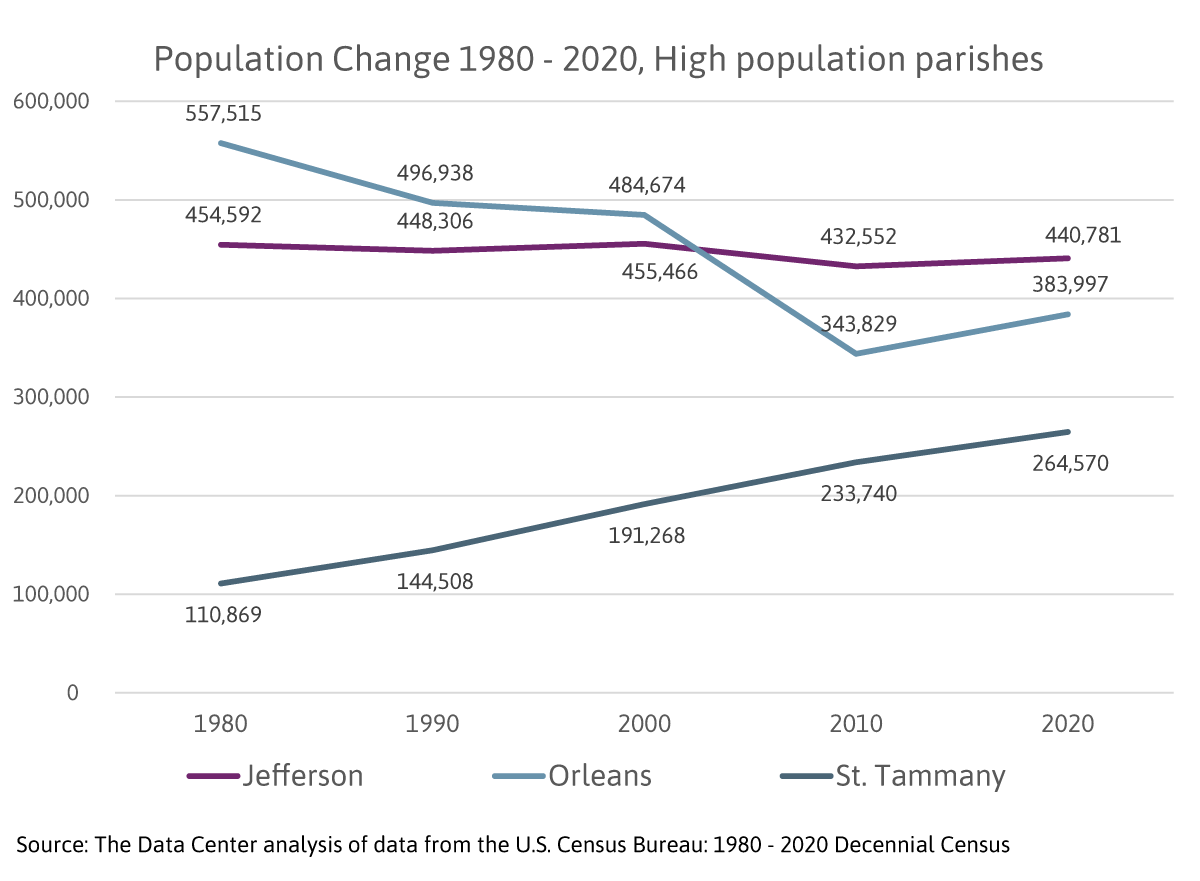 However, population losses do not translate directly to loss of households. For example, while St. Charles lost about 200 residents between 2010 and 2020, this parish actually gained around 600 occupied households and average household size shrunk. Trends in occupied households may have more importance as parishes anticipate changes in tax collection and plan for flood and hurricane resiliency. 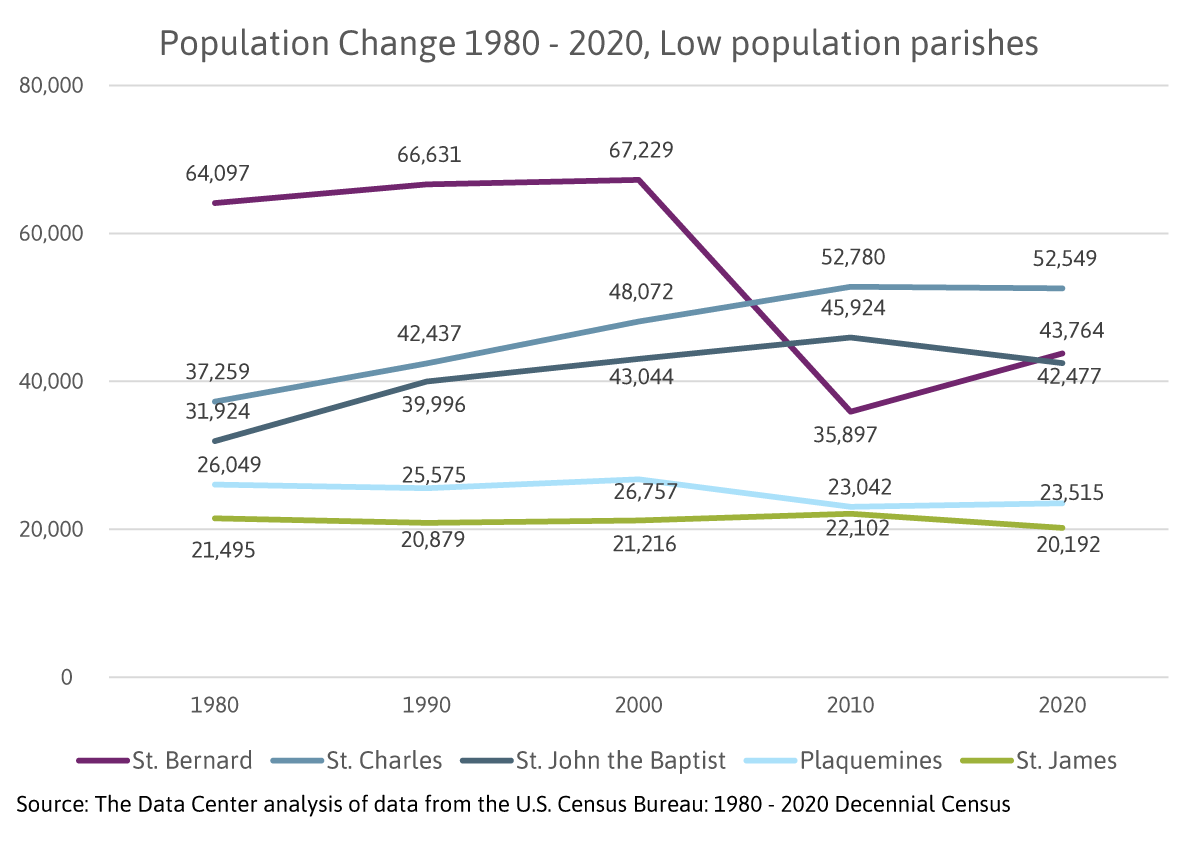 Among parishes that experienced population growth between 2010 and 2020, all experienced growth in Hispanic, Black, and Asian populations, as well as multiracial populations.

As described above, only Jefferson, Orleans, Plaquemines, St. Bernard, and St. Tammany parishes experienced population gains between 2010 and 2020. Below we highlight demographic shifts in these growing parishes. The largest increase across the metro was among Hispanic populations which grew by 25,355 in Jefferson, 12,966 in Orleans, 9,874 in St. Tammany, 2,701 in St. Bernard, and 1,169 in Plaquemines. The next largest increase across the metro was among individuals identifying as more than one race, which grew by about 8,000 people in each of the largest parishes: Jefferson, St. Tammany, and Orleans. The number of multiracial people in St. Bernard grew by 1,046, and in Plaquemines by 622.

The next largest increase across the metro was among the population identifying as Black (not Hispanic and no other race). This group grew the most in St. Tammany, which gained 7,539 Black residents from 2010 to 2020. St. Bernard gained 5,098 Black residents, followed by Jefferson at 3,887, Orleans at 1,010, and Plaquemines at 188.

Jefferson experienced the greatest growth in Asian/Pacific Islander population between 2010 and 2020 at 2,975. This group grew by 932 in St. Tammany, 710 in Orleans, and by roughly 300 in both St. Bernard and Plaquemines. 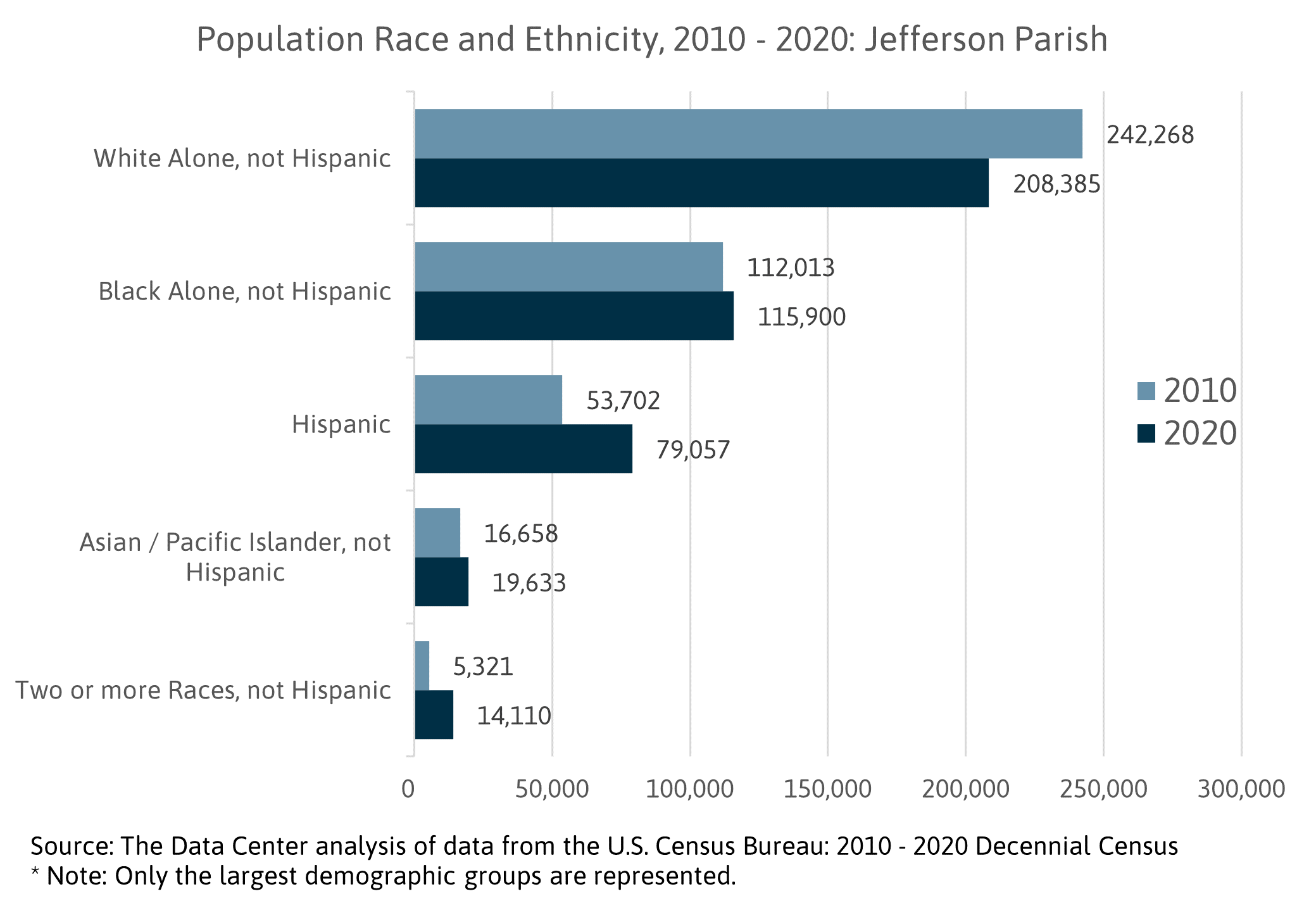 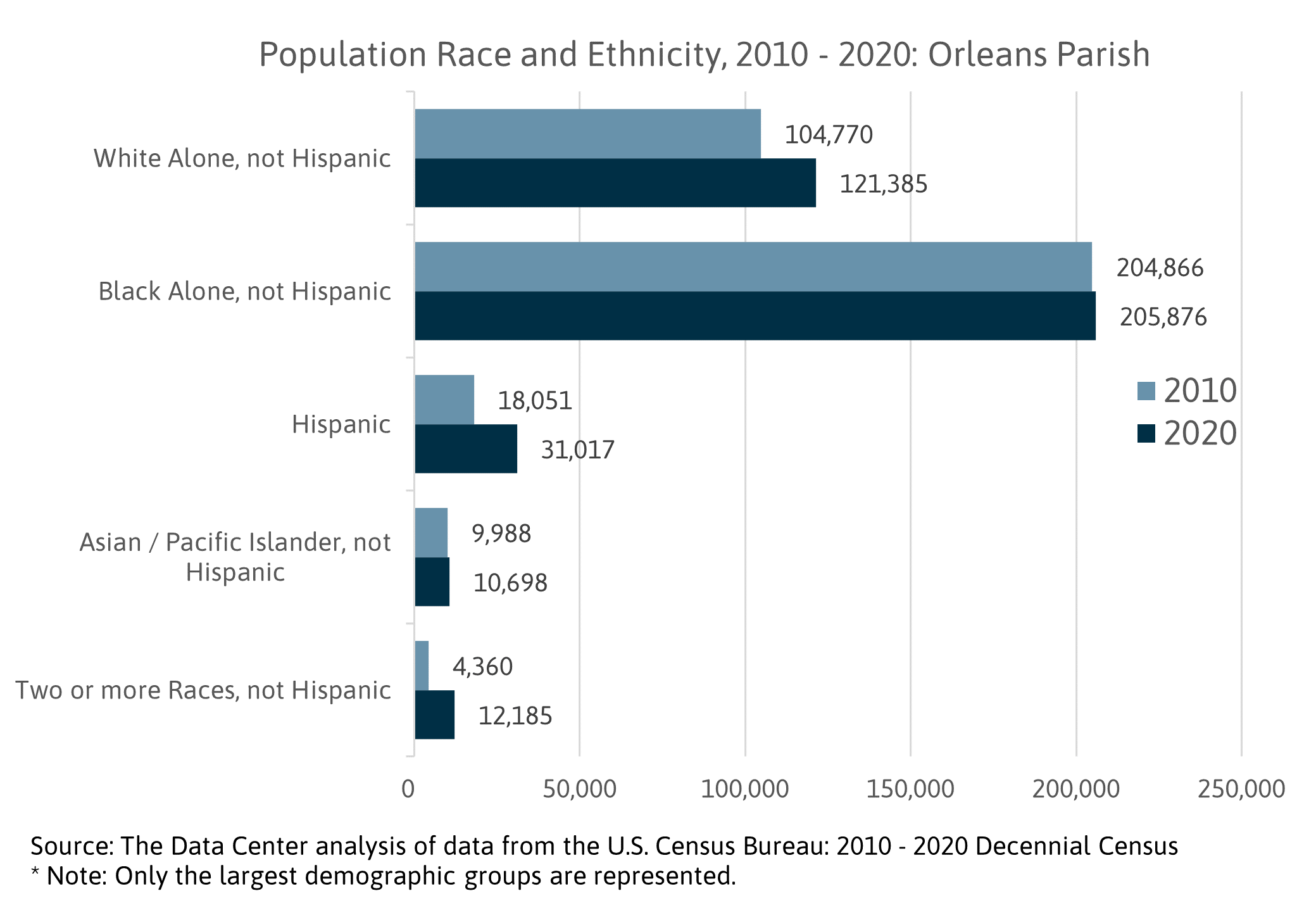 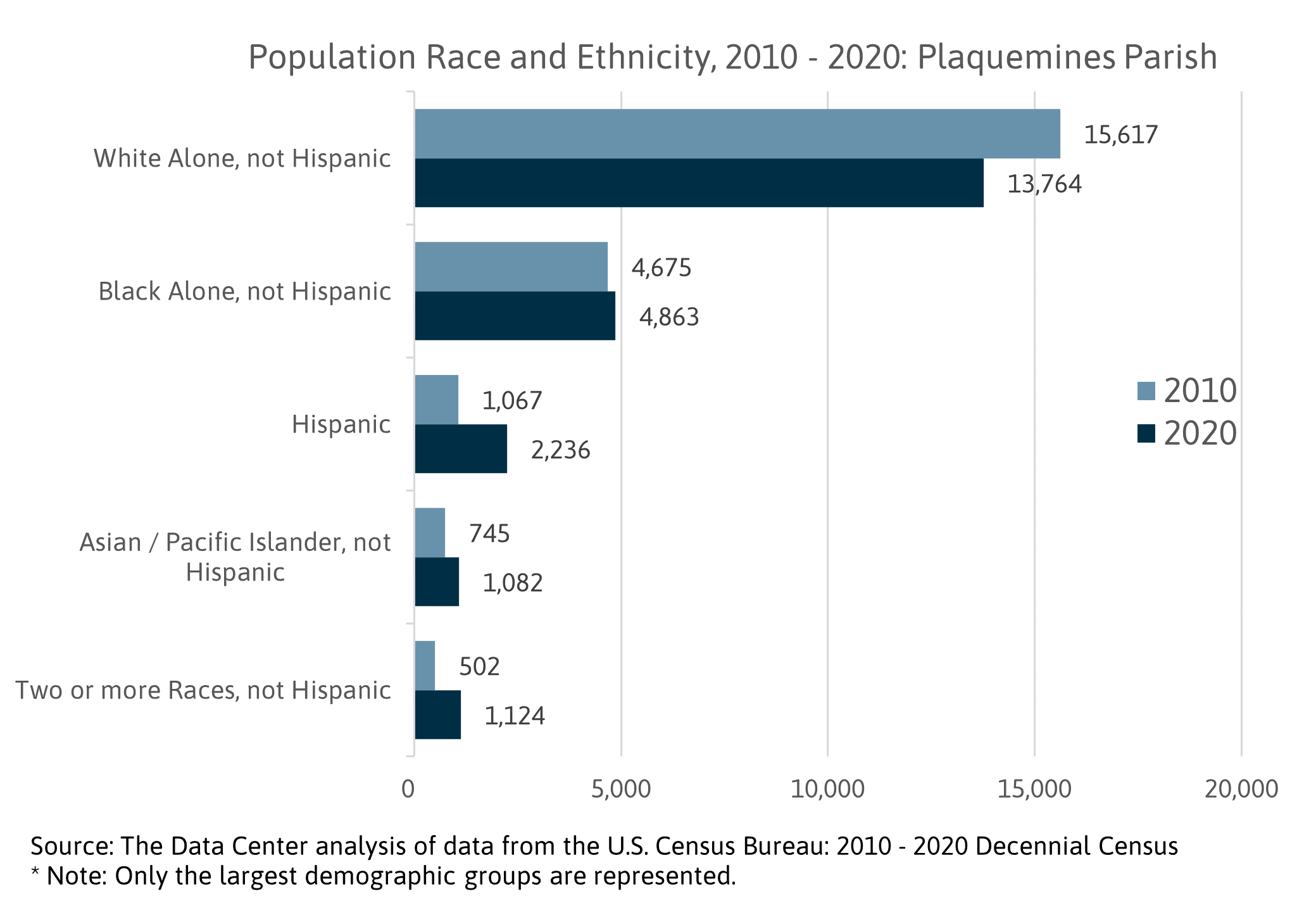 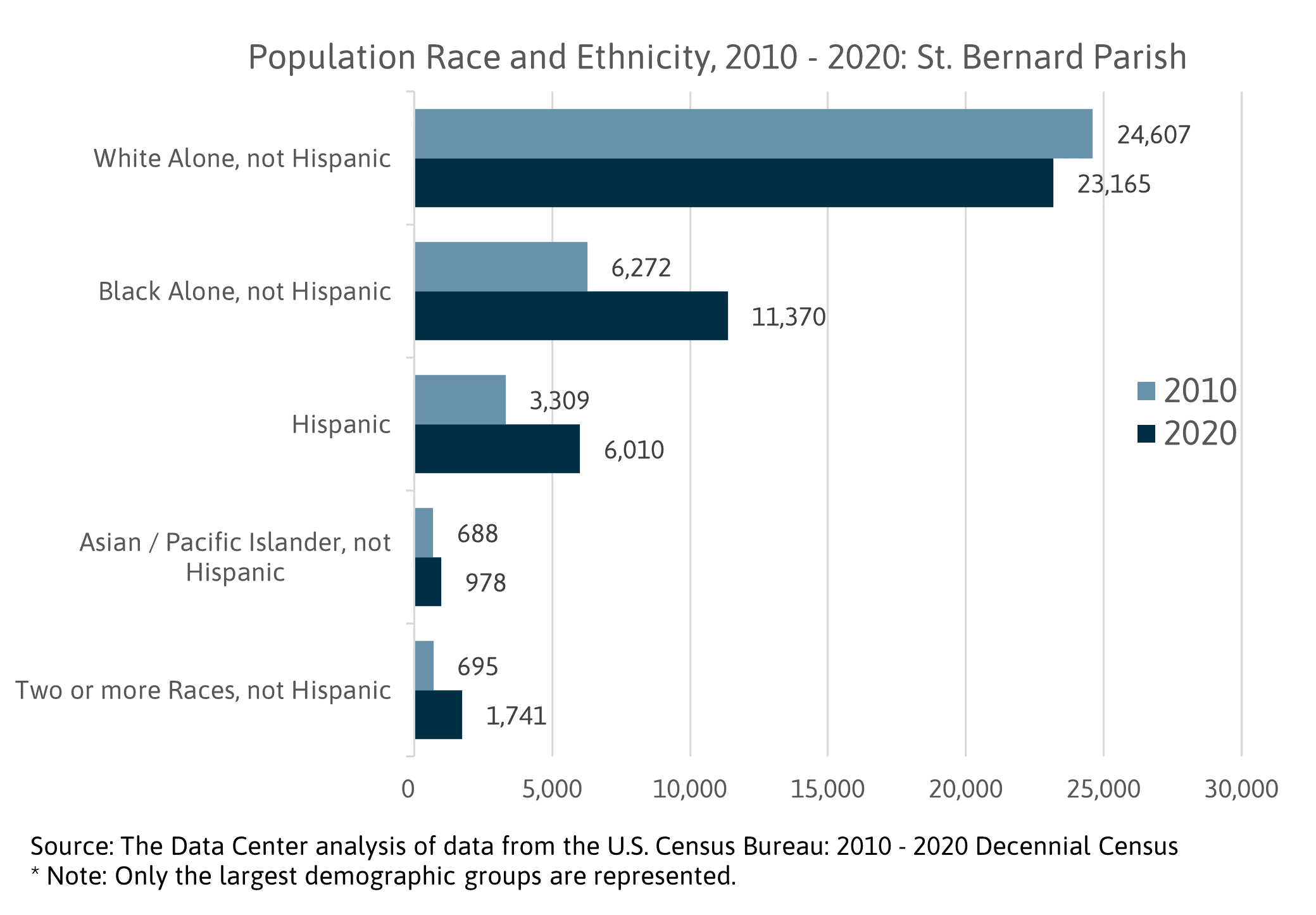 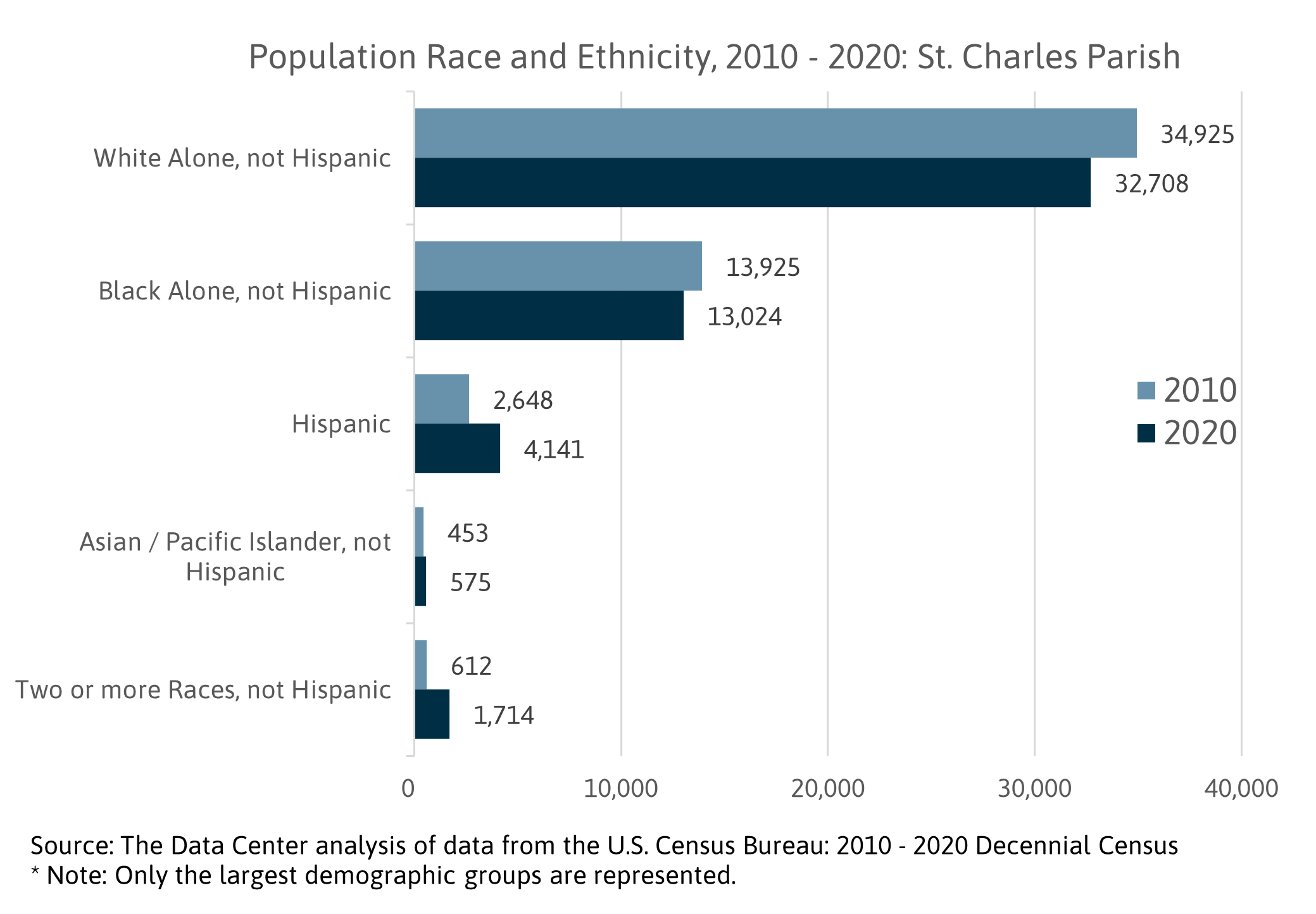 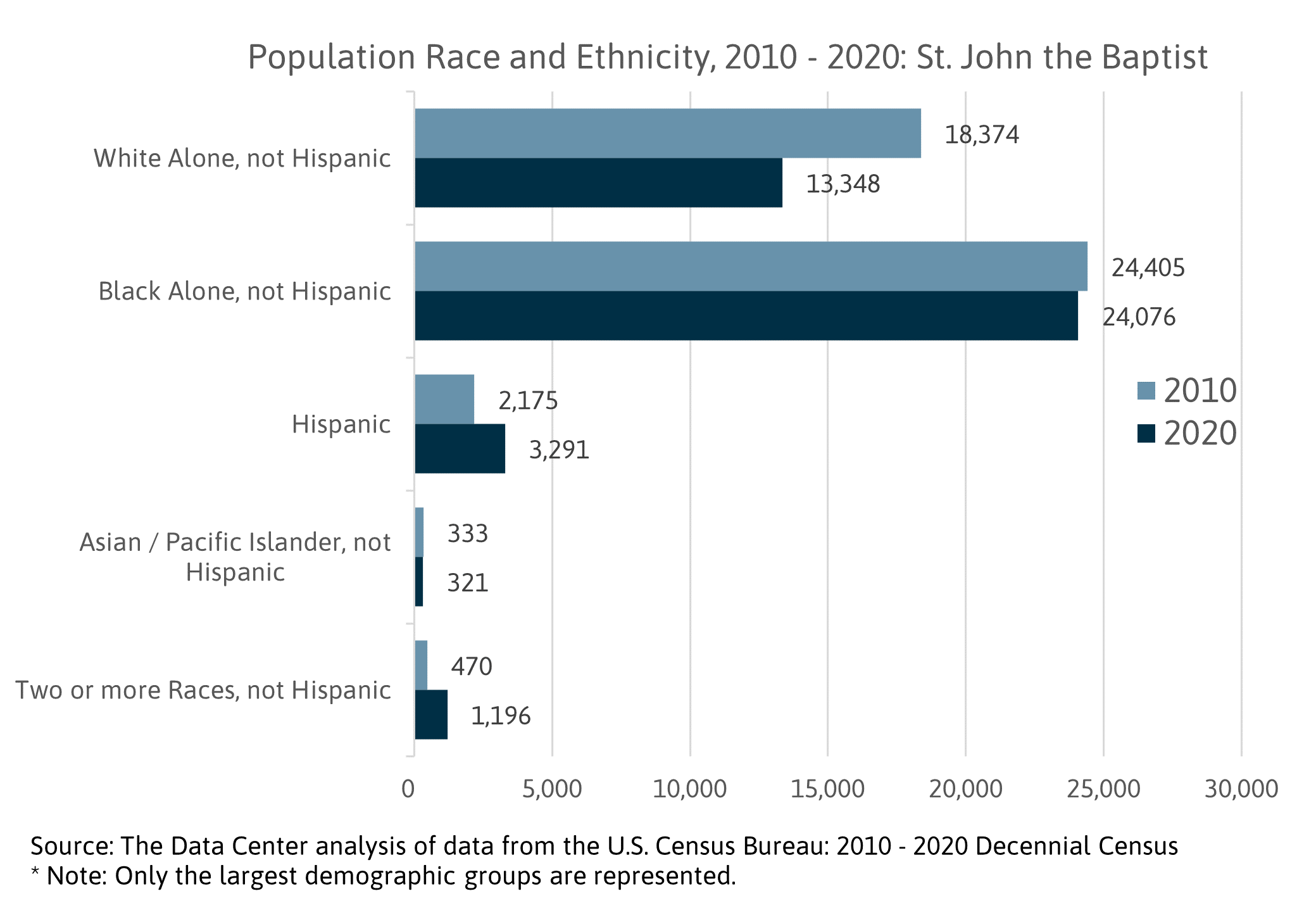 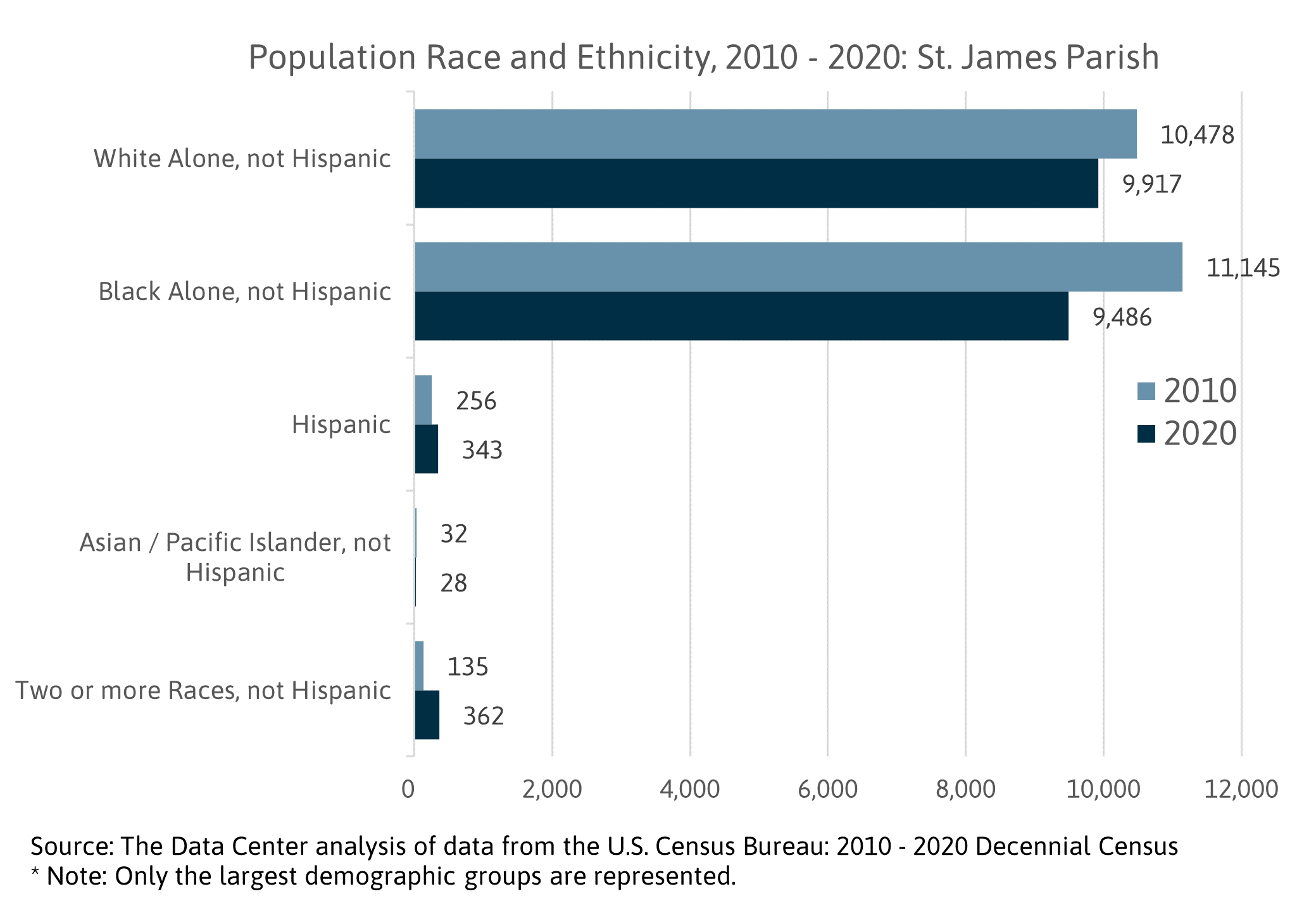 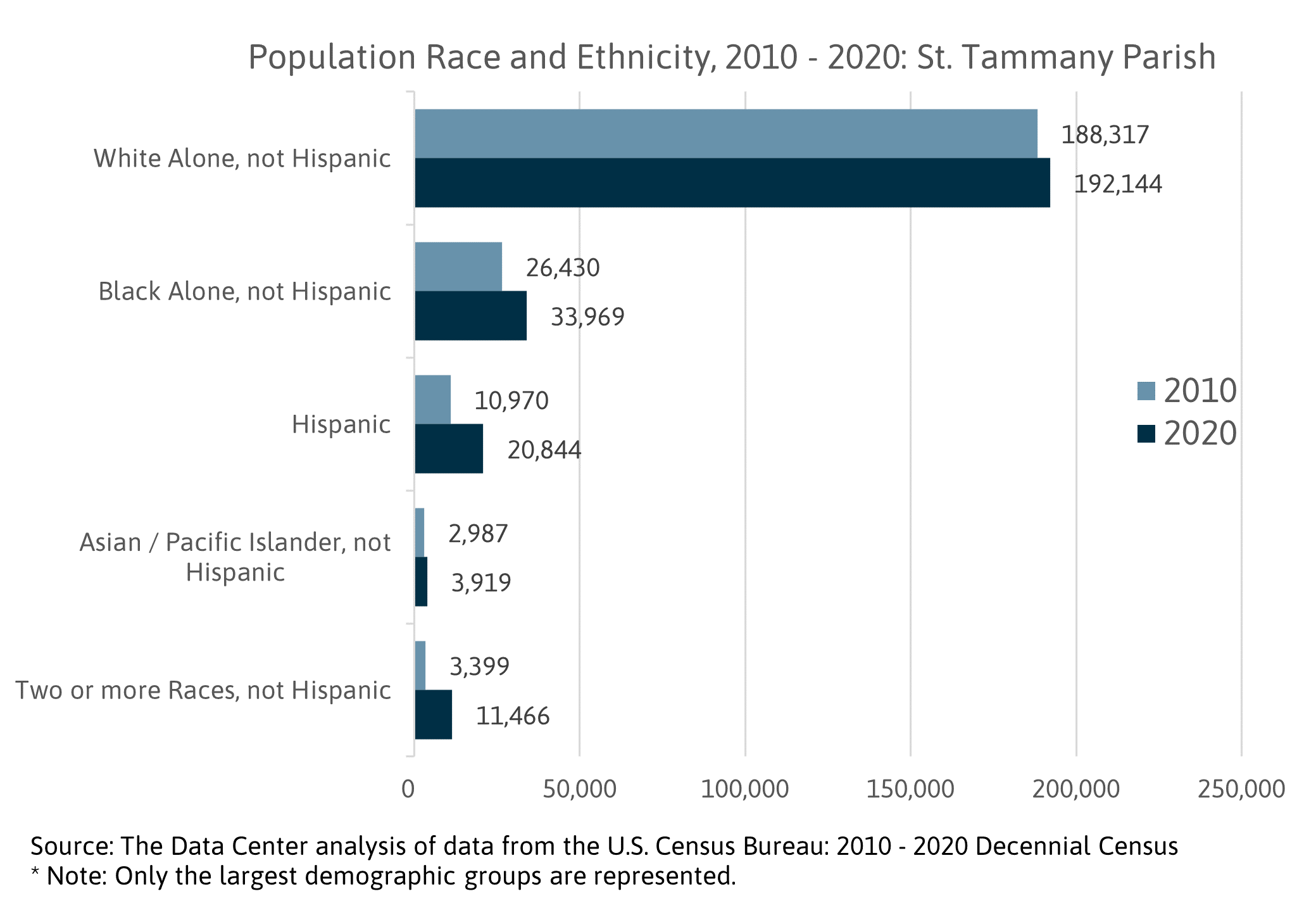 Limitations of the 2020 Census.

In addition to the limitations described above, the data used in the analysis in this brief contains error or “noise” injected to adhere to federal laws that require the Census Bureau to protect the confidentiality of respondents. For the first time in 2020, they utilized a technique called Differential Privacy to protect the data. Differential Privacy requires a tradeoff between accuracy and privacy, and the Census Bureau has applied this methodology in such a way that data for small demographic groups (such as Native American and multiracial individuals) could be inaccurate by more than 10%. This brief and the accompanying spreadsheet include data for small demographic groups—data that contains some uncertainty. As such, readers and decisionmakers should be cautious about conclusions drawn based on small (<100) numbers.

Ben Winck, “Forget the suburbs, the ‘exurbs’ are the place to be”, Business Insider , August 1, 2021, www.businessinsider.com/moving-from-suburbs-to-exurbs-pandemic-relocation-where-to-move-2021-7

“Census Bureau Releases Estimates of Undercount and Overcount in the 2010 Census,” U.S. Census Bureau, May 22, 2012, www.census.gov/newsroom/releases/archives/2010_census/cb12-95.html

Barry Edmonston, “The Undercount in the 2000 Census,” Population Reference Bureau, May 2002, www.prb.org/wp-content/uploads/2002/05/undercount_paper.pdf